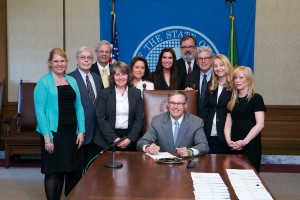 This legislation was inspired by the courage of Dana Widrig who was willing to share her story with the media and state lawmakers to help protect Washington citizens in their homes. Dana was brutally assaulted in her apartment by a maintenance man who gained unlawful entry into her home with an unsecured duplicate key. This legislation had bi-partisan and industry support because everyone agreed the law did not go far enough to protect the safety and privacy of Washington citizens.